This morning, my husband and Gustiamo‘s senior advisor, Michael, said: How much did Gustiamo pay for this ad in The New York Times “Extra Virgin Suicide, The Adulteration of Italian Oil”? I said, it’s not an ad; it IS what we, at Gustiamo, have been complaining about for years. For those who missed it, The New York Times, using illustrations, reports from Tom Mueller’s blog, and says: “Much of the oil sold as Italian olive oil does not come from Italy but from countries like Spain, Morocco and Tunisia”.

Paraphrasing: the olives are picked, taken to a mill, pressed, and the oil is shipped into Italy. Meanwhile, shipments of other cheap oils, labeled as olive oil, are smuggled into the same port where the Spanish, Moroccan and Tunisian oil is blended with the cheap oils and bottled as “extra virgin” and “produced in Italy”. Believe it or not, this is apparently legal. The New York Times continues: “the “olive oil” is shipped around the world, to countries like the US, where approximately 69% of the olive oil for sale is doctored”. Do you get it now? This explains why you can find so many inexpensive “Extra Virgin” “Olive Oils” on the shelves of your supermarket. 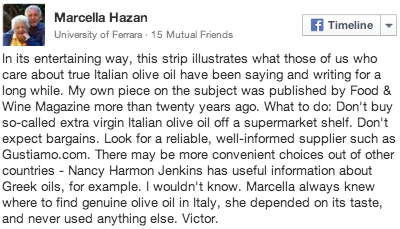 While we leave it to the authorities to deal with the legal issues of this fraud (and hopefully, reduce/eliminate it), what should you do? Take the word of Victor Hazan who is a planetary authority on Italian food. In his comment about this article on Facebook, Victor says: “…What to do: Don’t buy so-called extra virgin Italian olive oil off a supermarket shelf. Don’t expect bargains. Look for a reliable, well-informed supplier such as Gustiamo.com. …”

Are those real San Marzano tomatoes?

If It Is Cheap, It Is Fake. Buy Olive Oil only from Trusted Vendors.

Le Iene: When the Chinese Tomato becomes Made in Italy