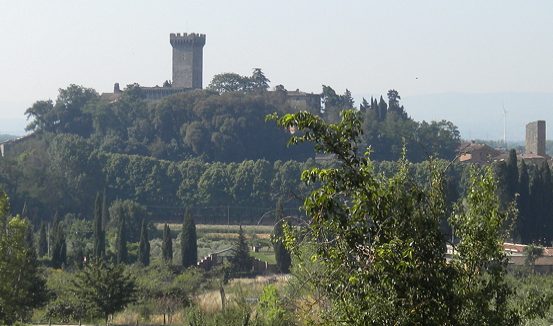 Vicopisano is an enchanting village on a hill. (right the view of the village from Vicopisano’s Farm.) It’s equidistant from Pisa, Lucca and Livorno and it was even mentioned by Dante Alighieri in the Divine Comedy when Dante had to chastise Count Ugolino who was on “il monte per cui i pisani veder Lucca non ponno”. (loosely translated – if you are in Pisa, you can’t see Lucca – and vice versa – because you have this hill, Vicopisano in the middle. Well, Dante says it a little better.)

Nicola Bovoli is a BIG man (left with Emilio, another big man and a friend) with a big heart! He bought his property in Vicopisano in the early 80’s because his father in law, Nellino, fell in love with the Tuscan country and wanted to start making olive oil. Fast forward, Nicola bought his beautiful property with 2,850 olive trees, 1,000 of which are several hundred years old; built a new mill next to the ancient one, on the property; fell in love with the olive oil world; became a professional taster and now he is one of the  most reputable olive oil experts in Italy. The whole family is involved in the farm. Although he and Lucia work in Milano at Nicola’s marketing agency, they spend as much time as they can in Vicopisano where their  daughter Simona and her family live full time and  tend to the olive oil business, which is Nicola’s real passion. He is outraged at the cheap prices of commercial olive oils (self named Extra Virgin) out there. How do they do it??? He says that it costs an honest Italian olive oil maker  6-7 Euros ($7.80-9.10) per liter ONLY to pick the olives.

Vicopisano EV Olive Oil is made with Frantoio olives and it is a medium fruity oil with notes of artichokes, almonds, just cut grass and cardoon. Vicopisano EV Olive Oil is certified Organic and also IGP Toscano, a certification given by the organization which monitors that each individual bottle is made following the strict rules of IGP Toscano. This organization is ahead of the times! Long before we started to become concerned about where our food comes from, the Consorzio Toscano was concerned about where its oils come from! And they were able to use the internet in the savviest and most modern way. This is trackability at its highest point!!! It’s fun, too. Enter the number you find on the bottle of Vicopisano (or any other oil certified by Consorzio IGP Toscano) on this page and you’ll learn immediately who, when, how the oil on your table was made.

I Made It! Edible Bread, Finally. Thank You Mark Bittman.