Gianduja is an Italian chocolate confection synonymous with Torino and Piemonte. In its purest form, it’s a homogenous mixture of chocolate and at least 30% ground hazelnuts. Gianduja can be made into chocolate bars, truffles, or spreads. It’s also used to flavor gelato and all kinds of desserts.

The Origins of Gianduja

Gianduja was created out of necessity. In the early 19th century, a Napoleonic blockade on English commerce meant a continent-wide shortage of cacao. To stretch their supply, chocolatiers across Europe would cut their chocolate with other ingredients. Those in Piedmont took advantage of the plentiful hazelnuts growing in nearby Langhe, and the delicious combination of chocolate and hazelnut was born.

A chocolatier in Turin named the confection “Gianduja”, after the archetypical Piedmontese commedia dell’arte character. Gianduja is a cheerful if lascivious Piedmontese peasant who loves drinking Italian wine. Today, the character has evolved into the mascot of Turin’s Carnival. 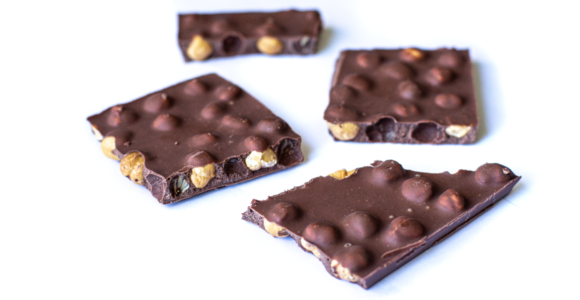 If you’ve tried Nutella, you have an idea of what Gianduja can taste like – well, more or less. True Gianduja must be at least 30% hazelnuts, and the most delicious kind uses the highest quality ingredients. Our Gianduja bar is dark chocolate with a softer, less brittle texture than that of a traditional chocolate bar. That’s thanks to the presence of hazelnut oil throughout.

Piedmontese hazelnuts, specifically the Tonda Gentile Tribolata variety, are the most sought-after for making Gianduja for their extra intense flavor. Our Gianduja producer, Marco Colzani, sources his hazelnuts from Terra Delle Nocciole, a cooperative of hazelnut farmers in Alta Langa. Yep, they’re the same ones who make our toasted hazelnuts!

Of course, the chocolate matters too. Marco uses single-origin Criollo chocolate, the most precious variety grown in Venezuela. He works with sustainable South American cacao cooperatives to source his beans, and regularly visits the farmers themselves. He even sources his cacao butter from these same farms, a real anomaly in the chocolate world.

How To Eat Gianduja

You can start with a small square, but you’ll probably be back for the big brick. We also carry Marco Colzani’s chocolate hazelnut spread, which is delicious on everything. Have it on toast or any breakfast pastry, use as a filling for cakes, cookies, or tarts, or just eat it with a spoon.