Luigi’s honey is raw! Perhaps we don’t say that enough. Lately, we’ve had a lot of people asking us about it. Our honey is made by Luigi Manias in Ales, Sardegna and it is as raw as honey gets.

Raw means that the honey is removed very gently from the honeycomb and jarred. It is unheated, unpasteurized, and unprocessed. Therefore, the naturally occurring good stuff is as potent as possible; think enzymes, minerals, and antioxidants with lots of bacteriostatic + healing properties.

Luigi’s honey is also organic which, as Luigi has taught us, is more relevant when it comes to honey than with other foods. Also, Luigi’s honey always tests negative for traces of glyphosate (!!). 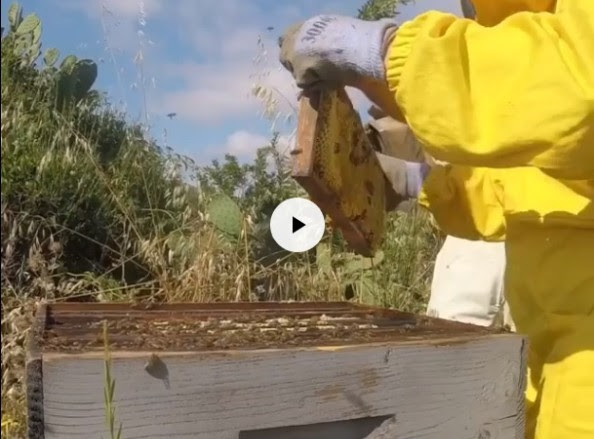 Did you watch the video linked above? Our friend Dan Toffey just spent his sabbatical (from his job at Instagram) in Sardegna working with Luigi. This video is Dan’s IGTV beekeeping chronicle.

Also, check out Dan’s (crazy hypnotizing) video below. When you scrape off the outer wax, the pockets of honeycomb are full of liquid honey.

So, if it starts as liquid why does Luigi’s honey crystallize?

It crystallizes because it is natural! All raw honey has the potential to crystallize. Crystallization is a good thing, a sign of high-quality honey.

If your honey crystallized and you want it to return to its liquid state, all you do is gently heat it up in a bain-marie and stir.

But eating it crystallized is amazing too! We like to spread it on fresh bread with our morning coffee.

All these honeys have their own aromas and flavors, let us introduce them better:

Eucalyptus honey evokes the woody aroma of the Mount Arci Natural Preserve’s eucalyptus plant, found in Sardegna. Like all honey, it has both homeopathic and culinary uses. It is considered a treatment for coughs and sore throats, and is the world’s oldest sweetener. Miele di eucalipto is considered especially healing since the compound eucalyptol is a natural anti-inflammatory and decongestant. But health chatter aside, we really love Luigi’s Eucalyptus honey for its quirky, herbal flavor and smooth sweetness. Stir it into warming tea or hot chocolate in the winter, drizzle it on fresh summer fruits, or pair it with your favorite fresh or aged cheese.

Raw amber-colored cardoon honey is bursting with powerful aromas, from tropical fruit to dried Mediterranean flowers, with an intense sweet & sour flavor and a slightly bitter finish. It’s a great match for just about any kind of cheese, as well as savory main dishes – try it in your next pasta or drizzle some on roasted meat.  Miele di cardo is the most common kind of honey in Sardegna, since the island boasts more than 300 varieties of cardoon – a thistle-like plant in the sunflower family.

Asphodel is a flowering plant that resembles a lily, native to the Mediterranean (its leaves are also the ones often used to wrap burrata!). Ancient Greek legend has it that the underworld’s Asphodel Meadows are where average souls were sent – but this honey is anything but ordinary! With a warm golden color, raw asphodel honey has a complex herbal and floral aroma and a subtly spicy flavor with notes of fennel and cinnamon.

Millefiori, which literally means a thousand flowers, is also known as wildflower honey. While this just might be the perfect everyday honey, Luigi Manias’s raw millefiori honey is anything but run-of-the-mill; his bees coast through the pristine air of Sardegna, and make honey so aromatic, you can almost taste the nectar of the island’s thousands of Mediterranean wild flowers. Like all honey, it has both homeopathic and culinary uses. It is considered a treatment for coughs and sore throats, and is the world’s oldest sweetener. We’re a little bit obsessed with Luigi Manias’s  miele millefiori paired with fresh summer peaches, but you can drizzle it over any fruit or tangy cheese, spread it on toast for breakfast, mix it into creamy oatmeal or yogurt, or stir it into hot tea.

Where Is Pantelleria? And What Is It Most Famous For?

The Sweet and Spicy of Taggiasca