“A honey that isn’t sweet” sounds like an oxymoron, but somehow it’s possible with Corbezzolo honey. One of the world’s rarest honeys, Corbezzolo comes from the flowers of Corbezzolo trees, known as wild strawberry in English. These trees grow across the Mediterranean basin, and are super abundant in Sardinia. Our honey producer Luigi Manias is a true expert on all things bees, and we think his Corbezzolo honey is some of the best you can get! 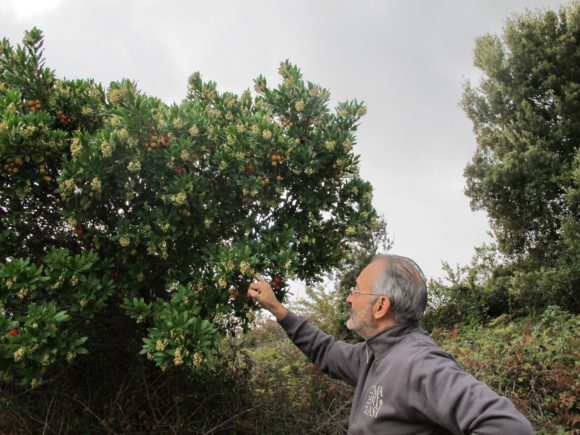 In an excellent piece for BBC Travel, Amy Bizzarri breaks down the history and uses of one of the world’s rarest honeys. Grazie Amy, we loved your article!

One of the world’s rarest honeys

So what makes this honey so rare? It all comes down to just how hard the bees have to work to extract the nectar.

-> The Corbezzolo tree only flowers at a particular time of year if the weather conditions are right. They need summer rains and a mild August, or they won’t flower at all. The flowers bloom from October to December, during the windiest, rainiest season in Sardinia, so it’s really challenging for the bees to leave their hives and collect the nectar!

-> The white, delicate, flowers unfurl verrrry slowly. They are vulnerable to extreme weather and can easily fall off the stem. Plus, their bell-like shape is extra difficult for the bees to deal with, especially on a windy day!

-> The flowers themselves contain only about half the amount of nectar as normal flowers. Consequently, the bees need to work twice as hard to collect enough material to produce Corbezzolo honey.

All these factors combined means Corbezzolo honey is produced in very limited quantities and is one of the rarest honeys in the world.

Corbezzolo honey is known for its particularly complex flavor profile. It has notes of leather, licorice, coffee, balsamic vinegar, and of course a characteristic bitterness.

A plethora of health benefits

Sardinia has one of the highest rate of centenarians in the world. Perhaps the honey has something to do with it! Honeys from across the world have always been used as folk remedies. But Corbezzolo is something different. It’s no secret that bitter tasting foods generally bring the most health benefits, and Corbezzolo honey is no exception. It’s exceptionally rich in minerals and vitamins, and has even been proven to reduce the growth and division of certain types of cancer cells in the lab.

Sardinians have produced and eaten Corbezzolo honey for at least 2000 years. There are references to it in the writings of ancient scholars such as Cicero, Virgil and Ovid.  Cicero, apparently not a fan of Sardinia, once said : ” Everything that the island of Sardinia produces, men and things, is bad! Even the honey, abundant on that island, is bitter!”. We totally disagree, but you should try Corbezzolo for yourself to see if it’s for you. One of the best ways to enjoy Corbezzolo honey is to pair it with traditional Sardinian products, but of course experiment as you see fit! Here’s a few ideas to get you started:

-> Enjoy on a cheese plate with fatty cheeses, such as pecorino sardo or vacche rosse
-> Drizzle on top of seadas or orillettas, traditional Sardinian desserts
-> Pair with autumnal vegetables such as butternut squash
-> Stir into your morning Moka coffee (Beekeeper Luigi’s favorite pairing! The bitterness of this honey with coffee is to die for.)

In Food and Wine: Tasting the Real Italy with Gustiamo