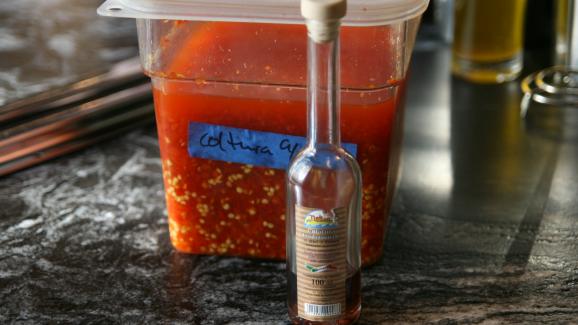 Here is a very interesting article about colatura. Actually, it’s a transcript of an interview that Josh McFadden, the chef who runs Ava Genes, a Roman inspired restaurant, in Portland, Or. gave to KUNM, the NPR station in New Mexico.

Josh said that he was thrilled to find a tiny bottle of colatura di alici in New York (guess where!?) a few years ago. The article says that Josh “uses fish sauce to finish dishes, and also, like the ancient Romans, adopts it as the basis for other sauces, bringing out the flavor of everything from grilled meats to raw vegetables.” Grazie Josh!

The article goes on to talk about the history of colatura. It was called Garum, by the Romans. Did you know that according to the Roman writers, a good bottle of garum could cost something like $500 today? And you complain about the price of our Real Colatura? The other thing I learned is that, since this fish sauce became an integral part of Roman cuisine, the garum factories (big, up to 50 employees) were all over the Empire, in Italy of course, but also in Spain, Portugal and northern Africa. What happened? When the Roman Empire collapsed, the Romans put taxes on salt, and because of these taxes, it became difficult to produce garum. The pirates arrived and destroyed all the factories. With the exception of Enzo, Giulio and Raffaella Nettuno‘s factory. They still make colatura as the Romans did. Even better, at a fraction of the old price. Grazie Nettuno!

Feast of the ONE fish