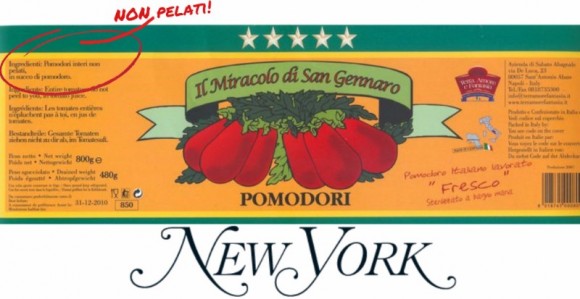 There is a secret among Italian Chefs. A red, juicy secret. Miracolo di San Gennaro Tomatoes. These tomatoes have a cult following and they are on every Italian Chef’s wishlist.

The secret, however, is out of the bag! NYMag wants the world to know about Miracolo di San Gennaro Tomatoes:
“They’re not available at most stores, so you have to know about them. Gustiamo is the only distributor for them, which makes them precious like a small gem.”

Tomato farmer, Sabatino Abagnale, has a secret too. The secret, or better, one of the MANY secrets of his flavor-packed tomatoes are their skins. These tomatoes are not pelati! That’s right, they are not peeled. In the words of Sabatino, “my tomatoes’ skins are their most flavorful part!”

Miracolo di San Gennaro tomatoes are, to the tomato world, what white truffles are, to the tuber world: hard to come by and rich in taste. Aren’t you lucky that Gustiamo caries them? 😉

Pistachios from Bronte & Almonds from Noto!

These almonds are sustainable.