Gazzani doesn’t make stereotypical, nutritionally worthless white rice. Yes, Gazzani Carnaroli and Vialone Nano rice is white (well, white-ish), but there is a lot more to this rice than meets the eye.

See this photo of the field? That’s vialone nano rice gowning, two months shy of its harvest. When rice is picked from a field like this, it is called risone, a.k.a. rice still in its hull. Rice in its hull is inedible. 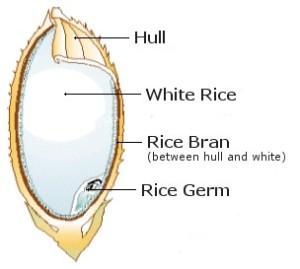 Instead, for both Gazzani’s carnaroli and vialone nano, the process continues. The next step is the polisher. The polisher removes the germ and part of the bran. Yes, just part. The polishing process is delicate on the rice. It doesn’t overly refine the rice  nor does it strip the rice of its nutritive properties. The polisher works in small batches at a very slow pace so that the rice does not get hot, which would be detrimental to the rice’s quality. (Btw, check it out, all these mechanical processes at Gazzani are water powered!)

Riseria Gazzani’s Marco Soave (did you watch our instagram story?) strongly dislikes conventional white rice where often all the bran is removed. “It’s easier to remove all the bran,” he told the Gusti Team. “That’s why the big rice companies do it.”  In fact, Marco and his team work hard to keep some bran on their white rice. “Without the bran the rice is less good for you,  it cooks too fast, and it makes terrible risotto!!”

Marco told us that thanks to all that good bran, it is super difficult to over-cook Gazzani Rice. His unofficial company tagline drives that point home: “Riso Gazzani: buono oggi, buono domani!” It’s funny because it rhymes and when Marco says it he always has an endearing grin on his face. It means that Gazzani Rice is “good today and good tomorrow.” The “white” rice never gets mushy, even if you eat it as left overs the next day. And that… that is thanks to the bran.