A quick Google search for “bee pollen recipes” won’t yield much in terms of gastronomic interest. Unless, perchance, you’re looking for listicles of smoothie bowls or pollinated protein bars.

Luigi Manias’ bee pollen is so much more than a gimmicky garnish. And while we certainly agree that nothing elevates a bowl of granola quite like a sprinkling of these delicate, polychromatic granules, we want to inspire you to go beyond their instagrammable aesthetics and impressive nutritional profile.

Bee pollen is often relegated to the “health food” category of ingredients. Prized first and foremost for its nutritive qualities, and second for its actual gustatory attributes. Now don’t get us wrong. We applaud all attempts to incorporate bee pollen into your regular routine. By all means, bespeckle your smoothies with bee pollen to your heart’s content. Their elegant sweetness and floral notes will undoubtably complement a blended banana. Each sip will bring a rush of smug, nutritional superiority. A burst of energy brought to you on the backs, well, legs, of a thousand Sardinian bees. But was bee pollen created for breakfast bowls? We don’t think so.

The first thing to keep in mind is that bee pollen has a certain seasonality. Different flowers bloom at different times of year. This means pollen collected in the spring isn’t the same as the one in the fall, creating a kaleidoscope of flavors and aromas. Bee pollen this special deserves to be treated like the unique gastronomic marvel it really is. 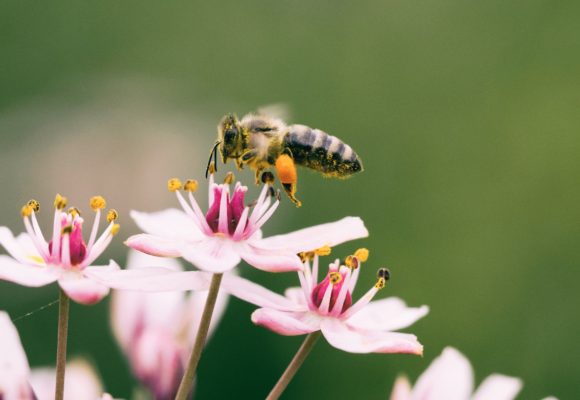 Luigi’s bees forage exclusively in Monte Arci Regional National Park, an uncontaminated area on the western side of Sardegna. Luigi’s pollen was harvested in the spring, when the following four flowers are in full bloom:

-> Cistus: A showy plant with pink or white flowers in the rockrose family

-> Lavender: We’re assuming you’ve heard of this one.

This variety of flowers explains the color variations within each jar of bee pollen. No two jars are the same!

Bee pollen is quite literally little spheres of compressed flower pollen. Luigi harvests and dries them according to a strict protocol to maximize nutrition and flavor. The resulting pollen is pleasantly crunchy. Every bite creates a small, powdery explosion.

Each bit of bee pollen is like an encapsulation of a Sardinian springtime. Picture gently undulating volcanic hills awash with a Mediterranean breeze. Their flavor profile, unsurprisingly, is remarkably floral. You can identify notes of honey and hay with a slight underlying tanginess. 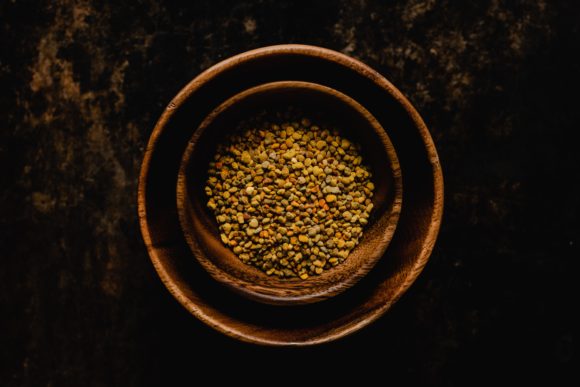 Luigi’s favorite way to eat bee pollen is on top of his morning yogurt. Honestly, dairy in general really is a wonderful way to enjoy this product. Try bee pollen with mozzarella, ricotta, gelato, or even with a sheep’s milk cheese such as Pecorino Sardo.

The pollen’s honey-like qualities with surely shine in sweet concoctions like a Macedonia di Frutta with subtler fruits such as grapes or pears. Their tanginess and floral notes could be interesting in a gentle meat or fish tartare, atop a crisp green salad with fennel, or even as a finishing touch on a bowlful of creamy risotto.

Luigi does advise against heating the pollen in any way, as this damages its nutritional and flavor compounds and lends a less potent result. That being said, we’ve heard of chefs incorporating bee pollen into pasta dough.

One thing to keep in mind when adding bee pollen to your diet, is that it’s an incredibly rich food. Let your body become accustomed to it before eating too much at once!

In Sardegna Honey Can be Bitter