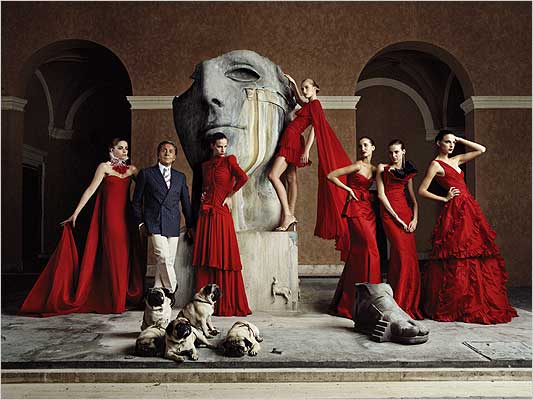 The “senior advisor” and I went to see “Valentino, the Last Emperor”, last night. A delightful documentary about the famous designer’s glamorous life, his business and life partner, Giancarlo Giammetti, and the painful process of modernization of a craft which is about to disappear. In the film, we see Valentino and his friends in Paris, Roma and Gstaad working, arguing, having fun, celebrating… but never eating. During the entire hour and a half, nobody was seen eating, not even his 5 dogs. Is eating an activity that is not done, in the fashion world?

The movie was at the Lincoln Plaza Theater, where we go very often. Nearby, the only decent restaurant is Bar Boulud, where we also go very often. Last night, too. I like the food, although it seems to me the menu has never changed since they opened. We had our usual – house pate’, the beef tartare [both very good]and a plate of cheeses. The latter was so small (3 very small pieces, lost on a big white dish) that Michael complained saying he was offended such a small cheese portion was $14. Even I, who tend to defend high prices for good ingredients, agreed. The waiter left with a look of reproach and arrogance, without saying a word. The bill came and the cheese was not included. While the right thing to do, it left me with a bad taste. Did they realize they made a mistake? Then, why not say so? Or is it that anytime anybody complains about something, they just take it off the bill? I’d like to know. Next time you go to Bar Boulud, compalin about something and see whether your bill gets lighter. Let me know.