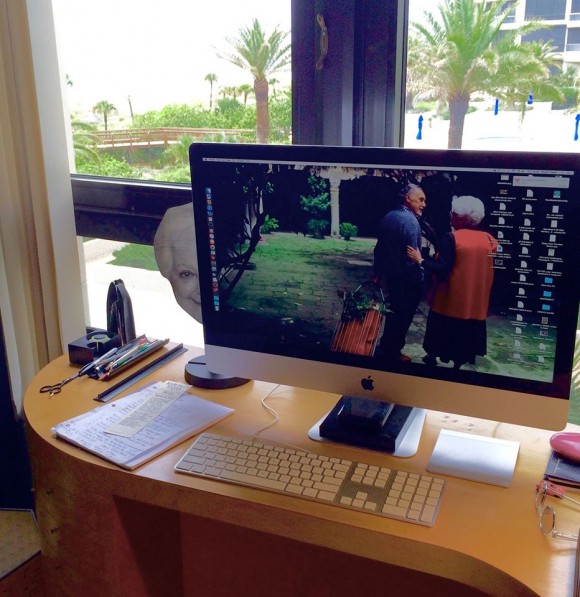 On the seven hundred and forty-sixth day since Marcella left Life, and me, I restored her desk to the state it was in when she last worked on it. When we left Venice to live in Florida, we lost one or two rooms. Among them was Marcella’s lovely study, sixteenth century beams crisscrossing the ceiling, a marble fireplace, an old refectory table for her to write on. In Florida, our bedroom became Marcella’s room. She had a large television that she tuned mainly to movies. Turner Classic Movies with Mr. Osborne was one of her favorites. We built a desk for her in a corner of the room, overlooking our terrace garden, and beyond it, the Gulf of Mexico and its sunsets. It had two tiers and many drawers. On it she kept a prayer book. Marcella had an unfavorable view of the local clergy, but she was a believer. She prayed every night in bed for any one she knew who was ill, or in difficulty, and she always prayed for me. From time to time, when she was leaving for the bedroom after dinner, she would playfully recite the rhyme she had learned as a child, “A letto a letto me ne vò/L’anima mia a Dio la dò/La dò a Dio e a S.Giovanni/Che il nemico non m’inganni.” (To bed, to bed I go/To the Lord I give my soul/I give it to the Lord and to St. John/That my enemies may not deceive me). On the desk she kept a photo of her mother taken when she was one-hundred years old, one of her father holding our son, when he was little, on his shoulders, one of our granddaughter Michela dancing, and a little one of me. Above her desk, she kept a Navajo spirit doll we had bought in Santa Fe. She wrote only by hand, rarely consulting notes, except for the measurements she reluctantly had to take. She needed no reminders of cooking procedures. There were holders with many papers, and with correspondence that sometimes took a while to be expedited. The room was so full of Marcella’s life that I couldn’t bear to leave it. I gave away my bed so that I could sleep in hers, and I made room on her desk for my computer so that I could write where she had written. I came to feel that Marcella wanted her space back. I returned my computer and my papers to my study, and I arranged her notebooks, her mementos, her books and papers, in the order in which she had left them. I am happier for it, and she may be as well. Marcella would not have wanted me to create a mausoleum for her, and I have made changes in our apartment that I don’t think would have displeased her. But Marcella lived a large life, which fills the place where I live my own remaining years. Victor.

Victor Hazan on This Christmas