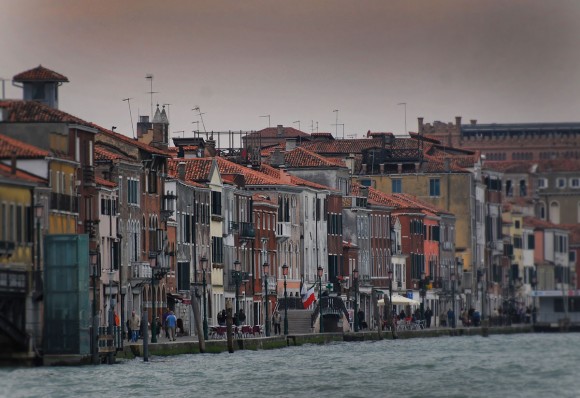 The last time Marcella and I were in Venice it was to stay at the Hotel Cipriani on the Giudecca to celebrate a legend, the retiring general manager and our close friend, Natale Rusconi, with whom we had shared more than two decades of culinary adventures. I spent my days and sunset hours noodling around the island, enjoying its unequaled views of Venice and the almost total absence of tourists. What had not too long ago been a disreputable haven for smugglers and thieves, had become a collection of tidy neighborhoods, with a few shops, an art gallery or two, little markets, and a crowd-free embankment for long walks and glorious views. I suggested to Marcella that for a few weeks toward the end of the following year we could escape part of Sarasota’s busy winter season, and rent a small place on the Giudecca. “In the winter? – she cried – How am I going to keep warm?” “With the sweaters and overcoats we stashed away in our closets when we got to Florida”, I said. That was seven years ago. Unhappily, in Marcella’s future, there were to be no more winters or any other season in Venice.

On the flight to Venice that I took recently after a long absence, my feelings swung between yearning to be there again and wishing that I could turn back. My first walk confirmed my most pessimistic expectations. The invaders had landed, the city lay helpless under their feet. A few hours later I was in Campo S. Stefano having an indifferent meal at a restaurant I hadn’t chosen. We started late and talked much, generating lackadaisical service. It was near midnight when we got up from the table. I started back to my hotel, wondering how I would get through the days remaining in the week that I had planned to stay, but I quickly found that everything had changed. The beautiful streets were empty, the backpackers were gone, the pizza-by-the-slice and coke in the hand were gone, the smart phone pictographers were gone, even the vucomprà with their fake Louis Vuittons were gone. The intruders had vanished and out of the welcoming night the magic of Venice had revived, causing my thoughts to return to that failed old project, a winter on the Giudecca. Next year perhaps. This year I have a book to finish. But at 88, will I be able to handle a winter’s stay alone? Will I even have a choice?

I employed my old strategies for evading the daytime tourist crush. In Venice there are always tracks still unbeaten available for a morning’s enjoyment, to be followed by an unhurried lunch, to be followed by a nap. A leisurely shower, a fresh change of clothes, and one is ready for an evening Campari soda at Florian’s, in Piazza San Marco. Most of the pigeons have retired, and many of the human pigeons as well. You sit back and exhale. At that hour in Venice there exists no more beautiful place to be or more civilized thing to do.

At home we cook everything, but for restaurant fare I prefer seafood. If it were possible, I would arrange my dining out days alternating a good Japanese restaurant in New York with one of Venice’s native treasures. While lunching last month in one of the latter, I chatted with Luca, who orchestrates the service at his minuscule heaven for fish lovers, Le Testiere. The conversation alerted me to a phenomenon of which I was not aware. “There is a crisis developing in our business, said Luca, and it is not about the economy. It is about irresponsible reviews in online sites that are punishing good restaurants. I have no complaints because luckily we have been getting five stars from all our patrons, but I have colleagues who have been unjustly hurt.” I later looked up some of the online guides, and I was dismayed by the capriciousness of the judgments submitted by some of their subscribers. Establishments known to me for the excellence and variety of their kitchens and cellars suffered ratings that would have been appropriate for one of the many questionable trattorias that trade on poorly informed tourist traffic. “The problem, continued Luca, is that ours is an exceedingly simple cuisine based on extraordinary, but increasingly rare ingredients. Some of the customers who walk into places like ours have not acquired the knowledge that could allow them to appreciate the pleasures we have to offer.” Not a minute later, a woman and her teenage son walked in, claiming the table they had reserved. It was their first time. Luca handed them the menu and said he would presently be available to explain the dishes. When he returned the woman said they would like to order pizza. “I am so sorry, said Luca, we only serve seafood, but I’d be glad to show you where there is a pizzeria just down the street.” Victor.

Victor Hazan on This Christmas