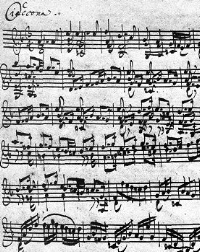 While listening to Bach’s Chaconne in D minor in the car my thoughts turned to Marcella’s monumental zuppa di verdura, her soup of many vegetables. My thoughts can travel in unpredictable directions but I am not quite equating Bach’s profound music with Marcella’s soup, inspired and inspiring though it is. My cerebral wiring however did spark one small connection, prompting me to find it in the extraordinary complexity and subtlety that both Bach and Marcella developed out of a simple beginning. Marcella started her zuppa by sautéing – or rather sweating – very thin slices of onion or scallions or both in olive oil and a dollop of butter. She then added chopped carrots, and while they were sautéing she stripped a few ribs of celery of their leaves and strings, chopped them up, and when she saw the carrots darkening, she put them in the pot. She continued thus, adding several leafy vegetables, beans, potatoes one by one. The genius of the dish resides in the cooking interval created by prepping each vegetable only when the preceding ones in the pot have begun to soften and darken. If she had homemade meat broth she kept it at a low simmer in a small saucepan, and added a ladle or two whenever it became necessary. If no broth was available, she followed the customary practice of Italian home cooks and dissolved a bouillon cube in simmering water. The soup cooked for many hours, if she had started it in the morning, it was done by evening, if she started late, she put it away in the evening, and resumed cooking the following day. She used a minimum of a dozen vegetables, sometimes more. It was a lot of soup and I froze it for her in plastic bags in portions sufficient for two to four people. After reheating the soup at serving time, Marcella would swirl in off heat a dab of butter, and bring the soup to the table with freshly grated Parmigiano Reggiano on the side. As some of you know, Marcella left a large manuscript on Ingredients and How to Use Them, which I am organizing and preparing for publication. It contains methods and recipes that she worked on in her last years, but never published. I am testing those recipes, and after a trip to a farmer’s market, I decided to try her zuppa di verdura. This is what went into it, aside from butter, olive oil, salt, and freshly ground pepper: spring onions, red Italian onion, carrots, celery, pole beans, snap peas, quartered peeled potatoes, Swiss chard, dandelion, leek, red bell pepper, unpeeled small fava beans, zucchini, cannellini beans, and fresh Roma tomatoes. I blanched and peeled the larger fava beans I had bought, and set them aside to add to the soup when reheating it. Victor.