Tomatoes may not be the first crop you think of when it comes to mountain landscapes, but that’s where farmer Sabatino Abagnale grows his coveted Il Miracolo di San Gennaro tomatoes.

The Monti Lattari is a small mountain chain in Campania stretching across the Sorrentine peninsula, almost completely surrounded by the Tyrrhenian Sea. As you’re likely aware, “latte” means “milk” in Italian. Milk-producing cows and goats have grazed on the rich vegetation of these slopes for thousands of years, which is how the mountains got their name!

High up in these “milky mountains”, Sabatino cultivates a twelve-acre plot nestled amongst the peaks. Seven acres grow tomatoes, and the other five produce a Slow Food Presidium variety of artichoke (Castellammare). Hundreds of feet above sea level, the environment of this small area is vastly different from other Campanian tomato fields. As a result, Sabatino produces some of the most flavorful and unique tomatoes in the world.

Unlike other Campanian tomatoes growing in the windswept Vesuvian foothills, il Miracolo di San Gennaro have thin, delicate skins. Sabatino maintains the skins are the best and most flavorful part of il Miracolo. In fact, he preserves his tomatoes whole and with the skin on. 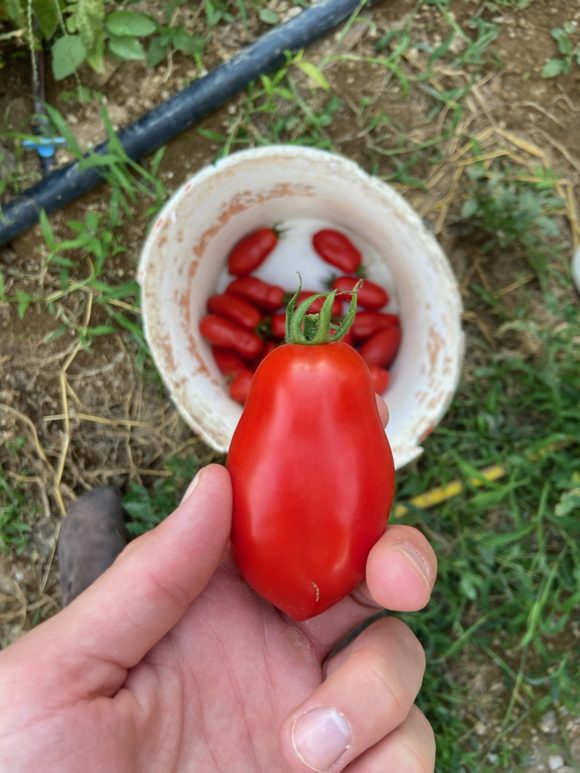 Il Miracolo di San Gennaro production starts with the one and only Slow Food protected tomato seed: Antichi Pomodori di Napoli, or less poetically, “SMEC 20”. This is a heritage variety of tomato genetically identical to San Marzanos. However, as the San Marzano Consortium only recognizes tomatoes growing in the Agro Sarnese Nocerino micro area, Sabatino won’t get an official San Marzano DOP certification. Not that he wants one! His tomatoes go beyond DOP. Not only is he using an ancient variety, he is growing them in a remote locale with the most beneficial climate.

Up in his mountainous plot, temperature varies significantly over the course of 24 hours. Due to the elevation, the sun shines much stronger during the day and ripens the tomatoes to the deepest, sweetest red. However, come nightfall, the sun disappears behind the ridge and the temperature drops considerably. These cooler nights mean parasites are a rare, if nonexistent, threat to production.

The daily oscillation between warm and cool also means the tomato plants have a smaller yield. Sabatino only gets about 1kg of tomatoes per plant. With every plant producing such a small quantity, each individual tomato has an astounding concentration of flavor and nutrients. 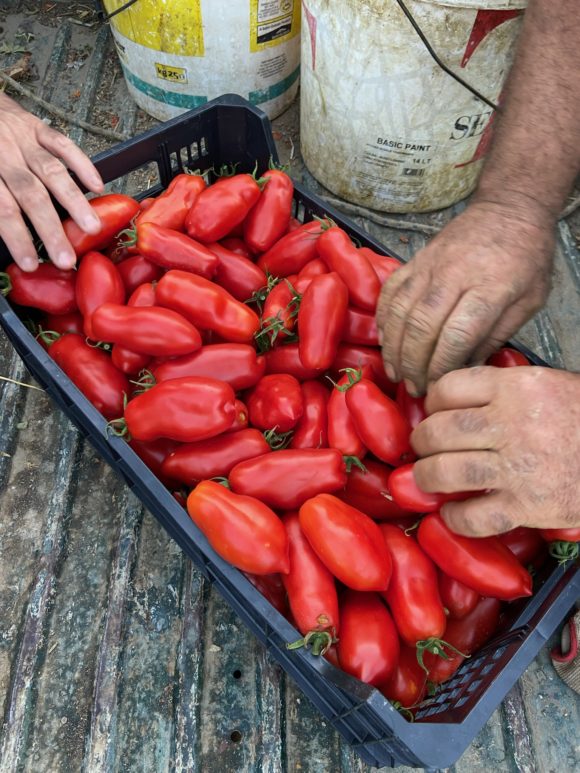 These precious tomatoes deserve to be treated as such. Use them in a simple pasta al pomodoro, a traditional ragù, or the most authentic Pizza Napoletana you’ll ever make in your life.